There will be a slew of catch-up going on henceforth and hereforto. The truth is, my current obsession with Instagram has tricked me into thinking that that’s an ample enough form of documenting the goings-on. Also my mother has started a weekly email newsletter that always includes an overshare on my life too. I call her Lois Lane for always sneakily trying to get the scoop. Anyway as such my actual journal is blank since March, and I’m paying to keep a domain name that I don’t visit in months. So here’s  a fourth-quarter-year-resolution to do better.

I shall seal it with an onslaught of pictures that will not make too much sense in the grand scheme of things. The chaos of this will be my punishment for being so bad at blogging.

Here’s a backside view of Parliament. I will admit that my patriotism has been restored over these beautiful summer months, and I am quite pleased to be in Queen’s country once again. Though I suspect as soon as the winter chill arrives, I shall be ready to abandon my passport once more.

This is the worst place in the entire city. At Covent Garden station there’s the choice of taking the lift, where you’re pressed up against 50 sweaty tourists, or you can choose literal hell on earth and climb 193 steps to the light of day. Flatmate Colleen and I bonded over the hilarity of slithering up these steps of lucifer, one at a time, dragging ourselves up by the germ-ridden handrail, all the while fighting off judgy athletic stair-sprinters and smug descenders.

Covent Garden is my mother’s favourite place in London, and every time I’m there I think of her. A tourist hot spot, it’s the epitome of cultural England: buskers, classical music, cheesy magicians and terribly good food. The second thing this place makes me think of is Audrey Hepburn’s unforgivable lip syncing in My Fair Lady. This is where she sold her flowers which, if you ask me, should have remained her life’s vocation because let’s face it, Henry Higgins was a chauvinist know-it-all toff who wasted his considerable means and talent on the dullest of professions.

In September I took a jaunt around Switzerland (more on that later) where I was delighted to find this fresco. Overall it wasn’t that great, but check out this cherub’s sad little bum. It’s the simple things in life that make me giggle. 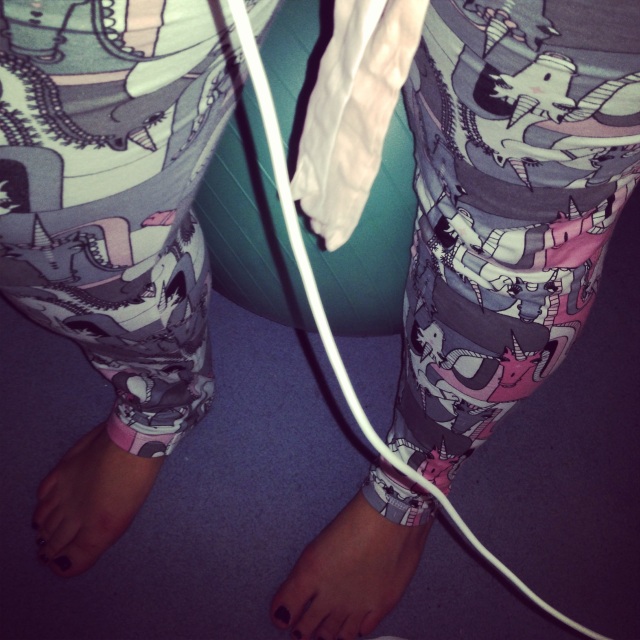 The Summer’s greatest purchase- dare I say the YEAR’s greatest purchase?- were these unicorn PJs that my bestie/soulmate/aunt Sarah and I found while she was visiting these sweet Isles in August. We related to the unicorn’s sly and shifty eyes. They are probably the most coy and sexy things I’ve ever owned. Should’ve bought a back-up.

My allegiance to macaroons was made official while I had high tea at Betty’s in Harrogate. Hand on heart, they were the best I’ve had, Harrod’s be damned, everywhere in Paris be damned too.

Oh how embarrassing, how did that get in there? Well, truth be told I took this to mark the occasion of my aging. On this day (sometime in July) I noticed my first wrinkle. After some detective work I realised it’s the result of my natural face actually being a scowl. But really. I scowl when I’m concentrating, reading, working- all unintentional, but scowly nonetheless.

We make fun of their funny hats and seemingly pointless existence, but I really took a moment or two to ponder these guys’ work day. Who decides if it’s cold enough for the overcoat? How heavy is that hat? What if one gets stung by a bee? Is their underwear regulation too? Why aren’t there women guards? How much do they make? How many of them have been frenched by drunken tourists?

Oh here’s just a candid but suitably artsy still of city life. I call it “crossing the road while taxi waits” (it’s a working title). But really, I think I could take pictures for language text books. You know the pictures I mean. 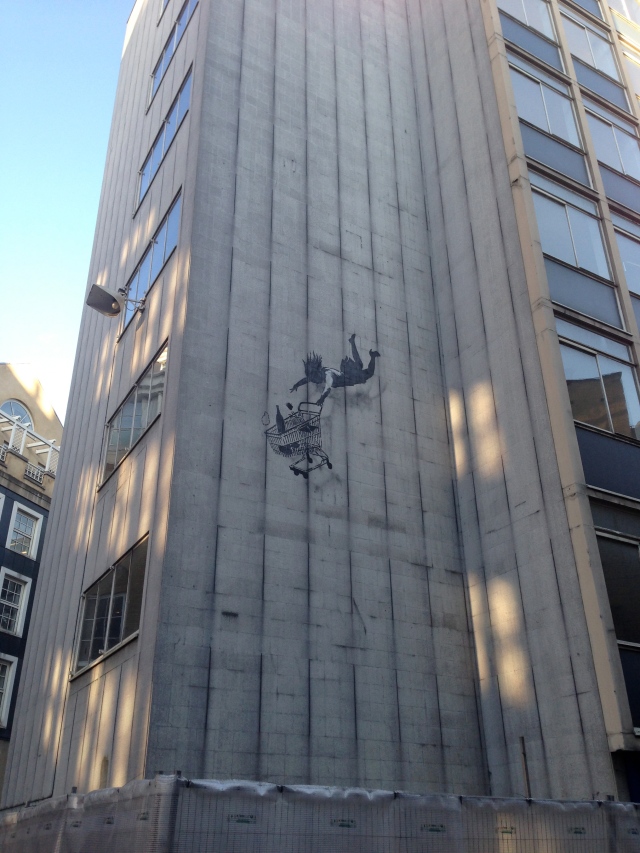 Colleen’s obsessed with Banksy, so we sought out a few of his originals. We walked all day to find this gem, which was tucked away behind Old Bond Street.

Here’s the Royal Albert Hall,  where I am sure trillions of dreams have both come true and been crushed. Truth be told, I’m a fan of this structure. Shiny golden Albert himself sits facing the concert hall (behind the camera).

Lindsay and I celebrated opening night of The Great Gatsby in period costume (super makeshift). Who knew that these once just acquaintances would become instabesties during Linds’ whirlwind British adventure.

← AN EXCITING FREELANCE PROJECT
IT’S BEEN A HELLUVA YEAR FOLKS →