THE BRITISH MUSEUM: WHERE HOARDING BEGAN

Museums are to London as lesbians are to a Tegan and Sara concert. They’re all over the place, and they’re cheap as chips. Some of them are even free. The British Museum asks for a small donation- I usually give a donation once and only once- and this life philosophy came about because of my first visit to the British Museum. I walked in, looked at a map of the joint, and realized this was the sort of place that would take me months to fully investigate. Basically the curators at this place are classified hoarders- artifacts from the dawn of time are held within these hallowed walls, from pre-historic times right through to now- oh yeah, and on all continents since the original continental drift. It’s immense.

From the outside, the museum looks like your typical English museum- trying so hard to be a Grecian palace, though stained by early revolutionary soot and pollution. But you walk through those regular chunky wooden doors, sneakily evade that donation box, and then before you know it you’re standing in a whitewash of marble and light. The roof is a dome of cloudy glass, angularly canopied all around. It’s sleek, it’s clean, it’s breathtaking.

I chose to visit the Egyptians and the Greeks, mainly because the idea of the mummy’s seemed like the trainwreck I wanted to ogle, and well the Greeks were right there next to me. I skipped all of that pottery that you see on the Hercules DVD Extras and went straight to the marble statues, which were incredible. The amount of detail contained in these sculptures just made my ego shrink to the size of a bean. I’m positive I could never sculpt like that- the folds of fabric and the veins and wrinkles of the subject are all so real. You can see movement there, you can see expression and emotion. 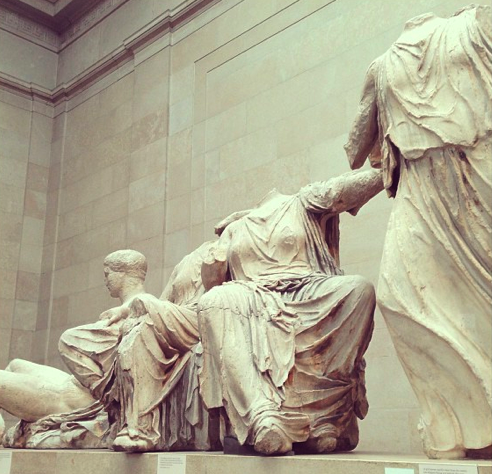 The Egyptians I love because they took everything just so seriously. It’s a good quality I suppose, but I just love to see how dedicated they were to their upper classes. Their symbolism is to be revered, and their sense of pride in life and in death is admirable. My favourite thing about them was the attention they took in decorating coffins. Well first off, the number of coffins they got ended up being like a Russian doll situation. But secondly, the intricate paintwork that went into decorating each box as a tribute to that persons life and family- it was just a lovely idea. I’d be ok with that if and when I perish.

← THE CHANGING OF THE GUARDS
WICKED… AND A TANGENT →