I am so excited to show you all this little project I was working on during my time in Germany. Working for the Church has many perks, and this was just the cherry on top. How else could a freshly graduated English major slip into the role of Editor in Chief and Head Graphic Designer of a global Headquartered office?

My assignment was to compile the media stories of 20 different countries, sift through them to find the best examples, translate them and display them in this book. I took care of the layout and the art work, and with the most incredible team of editors we completed a project that should have taken about 8 months– in ONE month. 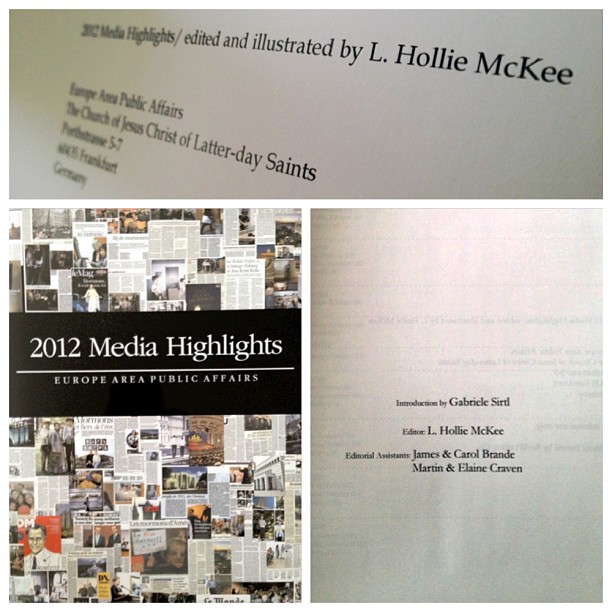 The project was a one-off idea, mainly due to the extensive media coverage of the LDS Church in Europe in 2012. Most of it can be attributed to Mitt Romney’s campaign (Mitt got a book), as well as The Book of Mormon Musical opening in London, and other temples being built in France and Italy. Currently the book is being shared with Public Affairs teams throughout the world.

I guess the thing that most prepared me for this project was my biggest folly at University: the art of procrastination. I have said it before and I’ll say it again: my habitual last minute rush to get a paper or project done the night before it was due, has prepared me for life. Thanks to my intense exposure to this practice and mindset, I somehow have a gift with speed- brainstorming, preparation and process are all streamlined in my mind, and the whole project, whatever it may be, seems to be a concord flight. I am only grateful that the team I worked with on this project were so gracious and willing to sprint along side me too. It was really the most fun I’ve ever had.

← AN APPROXIMATION OF HOW I ZUMBA
HAPPY BIRTHDAY TO ME →